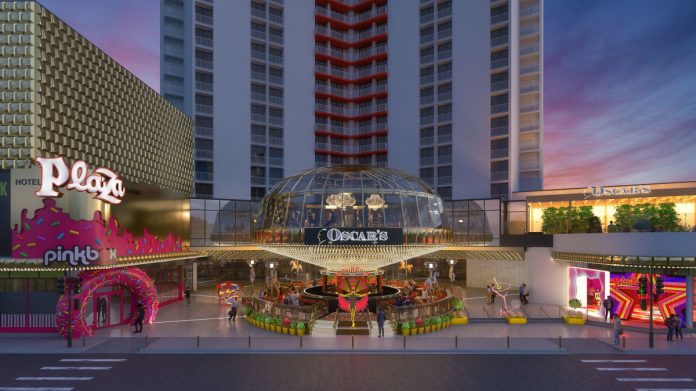 Las Vegas’ Plaza Hotel & Casino has confirmed a quartet of transformation projects are to take place at the downtown complex as it looks to deliver an “unforgettable and must-visit place” in the city.

At an event taking place at the venue, Jonathan Jossel, CEO of the Plaza, revealed that the developments will be downtown’s first smoke-free, social media friendly gaming area; animated Carousel Bar under the Plaza’s dome; rooftop patio at Oscar’s steakhouse; and the addition of Pinkbox Doughnuts.

“The Plaza is proud to call 1 Main Street home,” noted Jossel. “Main Street is where Las Vegas got its start, and over the last decade, the Plaza has continued to improve and create new experiences at this historic site.

“Like our neighbours and city leaders, we have been committed to revitalising downtown Las Vegas into a destination known for great art, dining, culture, hospitality, and entertainment.

“Today, we unveil plans to further these efforts and transform Main Street into an unforgettable and must-visit place in Las Vegas for food, drinks, and gaming.”

The facility disclosed that the “centrepiece” of the four undertakings is a reimagining of its portecochère under the dome into a Carousel Bar that promises to offer an “outdoor bar experience unlike any other”.

The 2,500 square foot venue will include an outdoor cooling system and seating for nearly 100 guests in booths, at the bar, and along an outer rail that will overlook Main Street at the western entrance to the Fremont Street Experience.

Adjacent to this will be downtown’s first smoke-free and social media friendly gaming space that aims to introduce the “latest and most advanced slot machines”. The almost 2,500 square foot gaming space will include the Brian Christopher Slots area that debuted last year.

Oscar’s patio will be created on the rooftop deck above the new gaming space, while Pinkbox Doughnuts will be accessible through an oversized, 3D doughnut with sprinkles.

The Plaza, which first opened its doors in 1971, will remain open during construction, which is expected to begin on all four projects later this month.